First order of business, I’M NOT IGNORING YOUR COMMENTS! I’ve found that a lot of the comments you have been leaving have been falling under my “spam” and have not been posted. I’m slowly going back through and replying to these comments. Please check your spam boxes as well!

I decided it was time to entertain myself with a mystery, something I had not done for quite some time. When the title Blood Orchids popped up, I was intrigued for two reasons. 1. because it takes place in Hawaii

And what a coincidence that I was looking for a mystery right about then. Lets jump on in to the review. 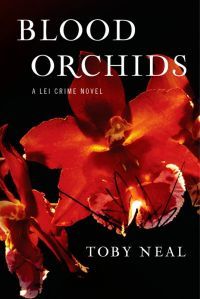 My Review: (No Spoilers)

This debut thriller doesn’t ease you into the mystery at hand, but takes off running from the first line and never stops. Even the first sentence is made to grab the readers attention.

“Drowning isn’t pretty, even in paradise”

The pace never slows down for the reader, and I was constantly amazed by the series of plot twists and the way every detail weaved together to create a story line that had me frantically reading to finish. What I enjoyed about this mystery, was how unpredictable it ended up being. Characters I wished to dislike ended up finding their way into my good graces, and those that I initially found to be disagreeable, later became a favorite. I also appreciated the depiction of a strong, young, female character. Although there were times in which I felt annoyance for her paranoiac behavior, I was able to reason why she must act in that manner.

This is not your typical thriller. Very jarring topics such as rape and murder are addressed, and not in a flowery manner. I found this to add to the story, and although none of the descriptions went very in depth, there was just enough to keep you on your seats, and beg for the perpetrator to be caught.

A couple of things that I found to detract from the book were:

The main protagonist in this story, Lei served as an amazing central character. She was not only complex, but there were multiple layers to her personality and as Toby Neal did a phenomenal job of putting the reader inside Lei’s head. At first, I found Lei’s brash, tough front annoying. It felt as if she was pushing everyone away, and refusing to trust or listen to others. I greatly abhor these characters, and it takes me a long time for them to grow on me. As Lei’s history slowly was revealed, I was better able to understand the reason behind her callous facade, and this helped greatly in making this thriller more interesting. I especially loved how Neal took his time in revealing Lei’s childhood secrets, as this added to the suspense of the book.

Each supporting character had his/her own unique personality and I found myself falling in love with them. One of my favorite characters in this book was Lei’s dog Keiki.A giant rottweiler that serves to protect Lei, and her only confidante. I felt as if Lei was extremely lucky as she had many people around her that were so willing to help and love her, if she would allow them. The walls that Lei built up to protect herself were frustrating at times, but necessary as you learn of her past. From Pono, her beloved partner in the police force, to her supportive friend Mary and auntie, I found all these characters lovable in their own way. Each had demons they were facing, and problems the had to deal with, but each had great love for Lei, and watching them support her through the times in which she had to deal with intense problems, was touching. (Even if they were quite brash in the way they showed it.)

The characters had real emotions, and expressed them in real ways. Pono’s gruff exterior, through his actions showed his soft, caring interior. *SPOILER* Lei’s aunt, who initially seems to be the perfect aunt taking in her niece, later has a dirty secret revealed. *SPOILER*  and a down to earth therapist all served to spice up the story. This added a more relateable edge to the story which I enjoyed.

I appreciated the fast paced plot, as I was never bored or skimming throughout this book. Neal does an excellent job of introducing various scenarios for the mystery, and each caused me to suspect/mistrust each character. This greatly added to the suspense. However, the downside to this was that it forced Lei to look much to suspecting and at a certain point I began to become annoyed at her obvious distrust towards everyone (except her dog). At no point was the plot ever at a standstill, and each new page seemed like a revelation abut a character. I really wanted to enter the book and help solve the mystery!

I’ll leave the plot review here, as I’m worried I’ll divulge too much and spoil the mystery…

I loved the setting, loved the mystery, and found this book to be everything I expected. So why not the five stars? I felt as if it was too difficult to connect with Lei, and I had problems with her character. But I’ve always had problems with “tough girls” in book, and thus unable to appreciate the book as much as I would have (as I found myself becoming frustrate throughout the book.)

One thing I liked about Lei was how she left little quotes hanging around so that she could read and ground herself in reality. Although the following quotes are not a part of the collection she had, they are little lines that caught my eye.

“It seemed like she was always too little, to late”

That feeling of helplessness and loss of self worth are perfectly summarized in this one line.

“There were apparently still beautiful things in the world”

Even as Lei is surrounded by crime and terrible things, she manages to find beauty and pleasure, which I very much appreciated.

Have you read any mysteries lately? What mystery do you recommend me? Let me know in the comments below 🙂